DRINKING FROM THE WELL 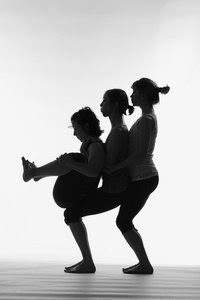 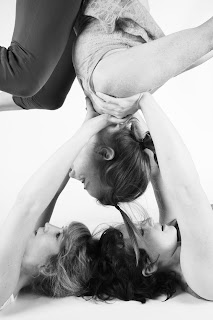 A post discussion will be held on Thursday 7th.

Drinking from the Well explores the wild and myriad experiences that surround pregnancy and the birthing process. This intimate performance features three dancers who have all experienced childbirth in unique ways, and aims to both represent, challenge, and deconstruct the culture of fear that surrounds pregnancy. Interweaving powerful choreography with experimental vocalizations and text drawn from interviews with a multitude of mothers, Drinking from the Well provides an evening of engaging, contemporary dance at its most engaging.

SOUND FEATURES:
The dancers use only their voices to create an entire soundscape for the show. The three dancers experiment with two and three part harmonies, as well as the odd bit of solo work. Sometimes, in a metatheatrical and humourous kind of way, the sound alters to acknowledge the challenges of vocalizing while moving - either moving as a dancer, moving as a pregnant woman, or movement during labour. Deirdre Murphy describes it as the use of "vocal melody and tonalities to convey emotional content without the specification of story," which suggests that the vocalizations provide a score that operates to deliver mood, while also operating as counterpoint.
This approach to a contemporary dance piece is quite novel and also beautiful.

This event is produced with the help of The Arts Council of Ireland
Posted by La Catedral Studios & The Back Loft at 10:40 AM 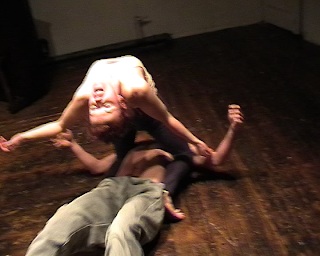 Mamuska Dublin returns for Fool's Day frolics in double treat for fans of the cutting edge! At 7pm, the Back Loft is set ringing with the haunting polyphonic Gregorian chants of 'Schola Hyberniae', followed at 8pm by the mayhem of Mamuska Dublin's experimental short performances, where audience and artists mingle in an atmosphere of play and discovery. A packed line-up of film, dance, music and live performance art to challenge and inspire. Featuring a raffle with complimentary drinks.

Free admission. Mamuska Dublin and RawClassico are supported by the Arts Council.
Posted by La Catedral Studios & The Back Loft at 10:44 AM

The Movement Exchange is giving a FREE WORKSHOP in the raucous style of BOUFFON COMEDY this Saturday March 19th from 1-5 in the Back Loft. This workshop will be given by Jaimie Carswell and Ciaran Taylor, Lecoq grad and director of the hit bouffon comedy “The Blanch”
Please RSVP to me so I have an idea of numbers.
What is it? Bouffon is a style of grotesque comedy where the performers exaggerate their behavour and physicality to the extreme, becoming hellish clowns whose absurd comic take on everyday life gives a vision into the hidden grotesqueness in us all. It’s raw, raunchy, offensive, and great fun. Come along and check it out!

See a clip of bouffons in action below or check out The Blanch yourself at the Mill Theatre, Dundrum on Friday the 18th at 8pm.

This workshop will involve a lot of movement so be sure to wear comfortable clothes and shoes. Also, bring pillows and cushions if you have them to pad out your bouffon bods. And once again, in the spirit of exchange, this workshop is FREE!

Come along, have fun, sweat, and get your bouf-on!

SCHOLA HYBERNIAE is a female ensemble specializing in plainchant and early polyphony. Hosted in the atmospheric raw environment of the Back Loft, this original performance promises to be a unique experience for the connoiseurs of gregorian chanting as well as for a new audience.

The artists are regular performers at Castletown House in Celbridge, County Kildare, where they have presented programmes of Easter, Advent and Christmas music. The group is also in great demand for liturgical celebrations and has sung at festive Eucharists, Carol Services and Vespers Services nationwide.The ensemble has a particular interest in chant from Irish manuscripts and they have performed at the monastic site of Glendalough as part of National Heritage Week, at the National Museum of Ireland, Dublin as part of its Medieval Music Series and at the bi-annual Roscrea Conference celebrating Irish Saints and the Liturgy.

RawClassico is an in-house production of La Catedral Studios curated byFrances Marshall and is funded by the Arts Council under the Small Festival Scheme.

Posted by La Catedral Studios & The Back Loft at 1:35 PM

Email ThisBlogThis!Share to TwitterShare to FacebookShare to Pinterest
Labels: RawClassico

THE GREAT HUNGER - by Peter Duffy


Peter Duffy presents a one man show of The Great Hunger, by Patrick Kavanagh.

Peter Duffy will give a work-in -progress performance of The Great Hunger using the complete text of the poem (originally banned), incorporating sound, props and lighting....
After the performance the artist will be open to feedback and discussion.
The long epic poem is one of the great works of Irish literature and some feel is Kavanagh's masterpiece. With echoes of the "Great Famine" in the title and in the text, the poem concerns the life and struggles of the anti-hero and small farmer Patrick Maguire. A narrative poem,fully of lyrical beauty,drama,description,and mystical insight,it is an un-sentimental portrait of small farm life in 1930's Monaghan. It can still speak to us to-day,having great universal significance "
Posted by La Catedral Studios & The Back Loft at 5:12 AM