September 2008 - Dublin Fringe at the Back Loft

Bridge: Niamh Condron & Julyen Hamilton
Look under the bridge, what lies beneath? What's keeping the bridge from crashing under our feet? What will happen when we get to the other side? What have we left behind? Bridge is a duet that transforms an empty space into a poetry of bridged lands and places amidst air. 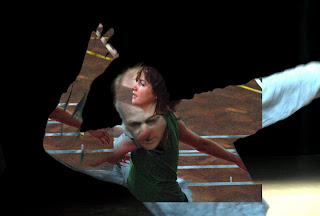 Step It Up: Rehearsed Readings

Following the success of last year's rehearsed readings, Dublin Fringe Festival is delighted to present Step It Up, a platform for script-based work that captured our imagination and sparked our curiosity. Taking place over two Sundays, six emerging writers showcase their new work, with facilitated discussion and refreshments.

2pm 'A-Picking At A Bone' by Carmel Winters
A toddler is snatched, another child is to blame. Only fifteen, his mother attempts to piece together what happened and why.

3.30pm 'Spider' by Arthur Sheridan
A drug addicted teenage daughter who seeks out her real parents only to find out it's too late.

1pm 'The Crown Jewels' by Shawn Sturnick.
A comic game of “Cluedo” where nothing’s sacred and everybody’s guilty of something. The Irish Crown Jewels have been nicked and King Edward VII is determined not to find out who dunnit.

3.15pm 'Leap of Faith' by David Lydon
A young and prosperous writer-for-hire is waiting to emerge from the shadow of ghost-writing with one extra day to complete his book.

4.45pm 'Thicker than Water'
is a fictional crime story written by a current inmate of the Midlands Prison that delves into the paranoid, tense, male mind-games of crime.

Posted by La Catedral Studios & The Back Loft at 7:53 AM


2006
1-3 December 2006 - Conspirators of Pleasure
A group exhibition organised by a collective of visual artists based in Dublin, exploring the darker side of the human psyche.

26th - 27th November 2006 - Papered Bodies
A mixed media exhibition by Jeanne Merer, with performances by various artists inspired by the paintings on display.

28th September-6th October 2006- THE CRINGE
Multimedia exhibition by a group of Sligo trained painters. Through this show they aim to bring together totally different mediums from around the country.

10th - 16th June 2006 - Open Doors -La Catedral Studios' Launch
A week of art exhibitions by the resident artists of La Catedral Studios to celebrate their one year anniversary in the newly refurbished premises at La Catedral Studios. The week long event also featured an Argentinean tango night, a day of fashion and design fair,a life drawing session featuring life model ElenB and two tango dancers and an evening dedicated to specially selected feature films and short films. The launch of the studios was part of the Creative corridor-Thomas Street Art Festival promoted by Dublin City Council, encompassing all the artistic endeviours of the area.
16th - 21st May - Portent
A group show of photographic works including both still image and time-based media by third-year students on the BA Photography course at DIT, Temple Bar.

26th - 31st April 2006 - Mapless
Opened by Mick Wilson. An exhibition of work in progress by MA students of NCAD

21st - 23rd April 2006 - 'Self' Portrait of an Artist
Opened by Mick O'Dea. A three day live art event by ElenB in collaboration with La Catedral Studios, featuring a mixed media exhibition of life drawings and portraits and interactive sessions of life drawing and photo portrait.

13th December 2005 - The Winter Solstice Project
A Night of performances, video installations with live acoustic soundtrack and art exhibitions by a group of students from NCAD


September 2005 - The Dublin Fringe Festival
A Season in hell by "The Stomach Box"
Aileens' lament for Art O'Laoghaire by "Theatre Lumiere"
Captured Movements - visual art meets theatre. The first visual art exhibition at the Back Loft, curated by illustrator Jeanne Merer in collaboration with a group of mixed media artists.

Posted by La Catedral Studios & The Back Loft at 7:07 AM