The play will run every evening except Sundays,
Doors open at 7.30, show starts at 8pm.
Tickets: €15 for individuals and €10 for group bookings.

The GRAND OPENING of Mr Joyce was held on BLOOMSDAY on Sunday 16th June and ended with a standing ovation. The opening was kindly sponsored by DIAGIO.

Here is a review of thejournalist.ie:


A sneak preview of 'Mr. Yoyce is leaving Paris'. The show is powerful insight into Joyce's life. Classical Irish theatre at its best. 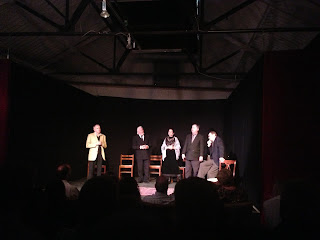 The  Back Loft Theatre and The Dublin Theatre Company are pleased to announce a new summer theatre programme, entitled“Summer Stage @ The Back Loft Theatre” in association with DIAGEO, which will take place in The Back Loft, 7-11 Augustine Street (off Thomas Street) during the months of June, July and August 2013.

The Back Loft Theatre is an unusual, bohemian style venue, located in a restored former Victorian factory in The Liberties which can hold a 70 seated audience.  It currently houses 24 artists’ studios and mounts exhibitions and theatrical events in its large warehouse style open space.  This is the first classical theatre programme the venue has embarked upon that will run for a lengthy period.
This summer Dublin Theatre Company will stage   Mr Joyce is Leaving Paris, by Tom Gallacher, Directed by Ronan Wilmot.

Ronan Wilmot has previously directed Mr Joyce is Leaving Paris in London at The King’s Head; Islington and in 1997 in Berlin at Friends of Italian Opera; Plaz de Lufbruke.
Mr Wilmot said, “We are delighted to stage Mr Joyce is Leaving Paris in such a unique and attractive venue for an extended period over the summer months.  We are delighted that DIAGEO have supported us. The Back Loft Theatre is a charming artistic centre located in what was originally a hive of sweat shop industry!”

General information
Mr Joyce is Leaving Paris is a play about James Joyce when he was living in Trieste in Italy with Nora Barnacle and their children.  He was teaching in The Berlitz College and was also the opera critic for the local newspaper.  His brother Stanislaus comes from Dublin to support them as they were living in dire poverty while Joyce was drinking and not writing.
The second part of the evening is set in Paris in 1939 as the Germans are advancing on Paris and Joyce is about to travel to Zurich in Switzerland.  He is now an ageing, nearly blind man and he is confronted by ghosts/friends from his past that he has used in his famous novels –Ulysses, Finnegan’s Wake, and The Portrait of The Artist As A Young Man.
A gripping, moving, fascinating insight into Ireland’s most famous writer.

Ronan Wilmot - Director
Ronan Wilmot has acted with the Royal Shakespeare Company, the Royal Court, the Young Vic, The Liverpool Playhouse 7;84 Co. in the UK; in Ireland with the Abbey, the Peacock, the Gate, the Project, the Focus and Dublin Stage One in Ireland. He set up Portrait Theatre Co. to co-direct with Cicely Berry OBE “Murder in the Cathedral” by TS Eliot in Christ Church Cathedral in 1991 during European City of Culture which ran for nine weeks.
He formed The Dublin Theatre Co. to present “Mr Joyce is Leaving Paris,” “Waiting for Godot” and “Exiles” by James Joyce in Berlin in 1996, 1997 and 1998. He directed “The Ginger Man,” by JP Dunleavy in The New Theatre and it toured to New York and Canada in 2000.
As artistic director of The New Theatre, Dublin he has directed “The Cherry Orchard” and “The Entertainer”. He wrote and directed “The Man Who gave The Beatles Away” and directed “Fool for Love “in November 2003.  As an actor, films include; “The Field”, “In The Name of the Father”, “The Snapper”, “The Van”, TV includes “The Insurance Man” and “Shergar”, BBC TV and “Wanderly Wagon”, “On Home Ground” and “Bachelor’s Walk,” RTE.

Posted by La Catedral Studios & The Back Loft at 11:16 AM