SEE|HEAR is a new initiative of recent graduates to bring together art and music, showcasing the current creative work of young adults in Dublin. Picture an all-day, family-friendly mini-festival indoors. Starting from 2PM, there will be an exhibit, workshops suitable for varied ages and live arts and crafts. This will carry on until the evening concert of contemporary music. The word 'contemporary' is often believed to be synonymous with the avant-garde and inaccessible, but this new event is seeking to dispel that belief. One of SEE|HEAR's goals is to showcase music being written now in Dublin, whatever the genre. Make sure to follow our Facebook page as the event develops: http://www.facebook.com/SEE.HEAR.DUBLIN

They'll be lots of ways for any of the creatively inclined to get involved!
Posted by La Catedral Studios & The Back Loft at 11:17 AM

Angels in America is the story of two couples living in New York in the 1980s, set against the stark backdrop of the Cold War and the AIDS crisis. Louis and Prior find their relationship in tatters as a result of a HIV positive diagnosis, with Louis’s commitment in question as Prior’s condition worsens. Joe and Harper’s marriage suffers under the strain of Harper’s valium addiction and pressure from Joe’s work. We see Joe struggle with his own sexuality as Harper slips deeper into dependency. Tempers flare and their Mormon faith is tested to its limit.

Angels in America is an 20th century classic and carries important messages on love and loss, politics and religion, and marriage and separation. The show opens in Studio THT Galway on May 27th and runs to June 1st before touring to Athlone and Dublin.

A fundraising campaign in support of the tour and encouraging the people of Galway to support these young artists is currently up on wordpress.com. Those who wish to donate will be warmly thanked and rewarded with tickets to the show and ThereisBear! souvenirs. You can find the campaign at thereisbearfundraise.wordpress.com, or search ThereisBear! Funding Video on Youtube.

For more information, please check out our facebook page www.facebook.com/thereisbeartheatre, or our fundraising page, www.thereisbearfundraise.wordpress.com

Posted by La Catedral Studios & The Back Loft at 10:59 AM

Opening Reception Wednesday 22th of May 6pm.
Daily Viewings from Thursday 23rd - Sunday 26th of May 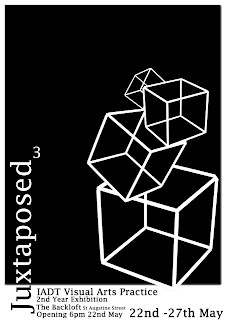 An exhibition by IADT Visual Arts Practice Year 2 featuring a diverse body of work such as print, painting, sculpture, installation work , photography and video.
Drinks will be served from the cafe @ the back of the loft and acoustic live music will be played by friends of the students. The artists will be present to discuss their work.

Closing night will be on the 26th May which will consist of live performance art from established and up coming artists.
Posted by La Catedral Studios & The Back Loft at 10:00 AM 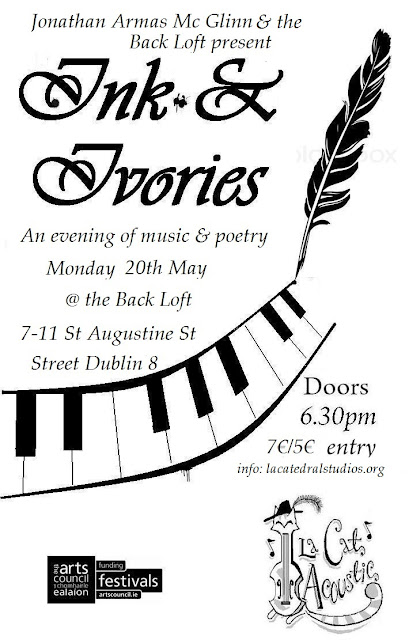 A one of a kind intimate, acoustic Salon of poets & Pianists.
Presented by Jonathan Armas Mc Glinn, (D.U.B - Dublin Underground Beats) in collaboration with The Back Loft's in house programme for acoustic music, La Cat Acoustic.
Posted by La Catedral Studios & The Back Loft at 10:05 AM

An exhibition of new paintings by Paul Swan

Daily Viewings - Thursday 30th May to Tuesday  4th June,
12-6pm or by appointment 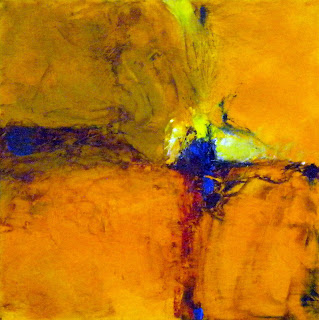 Arguably Paul Swan's best work to date, these recent paintings represent a strongly-emerging spatial sense as well as a move towards a more vibrant and intense colour palette. Figural elements in this largely abstract work have become more pervasive and yet are suggestive, mostly defying definition. Paul is fascinated with natural, phenomenal experience as well as theories in physics and psychophysics, so that his work is imbued with the sense of the immediate and the infinite, the convergence of the present and the past. He regards his paintings as conveyors of non-verbal meaning, as objects of communication and of healing.

Mr Joyce Is Leaving Paris, by Tom Gallacher
As part of Summer Stage@the Back Loft Theater
16th of June until end August 2013

The play will run every evening except Sunday from 8pm.
Tickets are priced at €18 for individual tickets and €15 for group bookings.
For Bookings contact 083 156 33 91 Monday to Friday between 10am-5pm or email backloftmrjoyce@gmail.com


The  Back Loft Theatre and The Dublin Theatre Company are pleased to announce a new summer theatre programme, entitled “Summer Stage @ The Back Loft Theatre” in association with DIAGEO, which will take place in The Back Loft, 7-11 Augustine Street (off Thomas Street) during the months of June, July and August 2013.

The Back Loft Theatre is an unusual, bohemian style venue, located in a restored former Victorian factory in The Liberties which can hold a 70 seated audience.  It currently houses 24 artists’ studios and mounts exhibitions and theatrical events in its large warehouse style open space.  This is the first classical theatre programme the venue has embarked upon that will run for a lengthy period.
This summer Dublin Theatre Company will stage   Mr Joyce is Leaving Paris, by Tom Gallacher, Directed by Ronan Wilmot.  It will open on Bloomsday, June 16th. Ronan Wilmot has previously directed Mr Joyce is Leaving Paris in London at The King’s Head; Islington and in 1997 in Berlin at Friends of Italian Opera; Plaz de Lufbruke.
Mr Wilmot said, “We are delighted to stage Mr Joyce is Leaving Paris in such a unique and attractive venue for an extended period over the summer months.  We are delighted that DIAGEO have supported us. The Back Loft Theatre is a charming artistic centre located in what was originally a hive of sweat shop industry!”

General information
Mr Joyce is Leaving Paris is a play about James Joyce when he was living in Trieste in Italy with Nora Barnacle and their children.  He was teaching in The Berlitz College and was also the opera critic for the local newspaper.  His brother Stanislaus comes from Dublin to support them as they were living in dire poverty while Joyce was drinking and not writing.
The second part of the evening is set in Paris in 1939 as the Germans are advancing on Paris and Joyce is about to travel to Zurich in Switzerland.  He is now an ageing, nearly blind man and he is confronted by ghosts/friends from his past that he has used in his famous novels –Ulysses, Finnegan’s Wake, and The Portrait of The Artist As A Young Man.
A gripping, moving, fascinating insight into Ireland’s most famous writer.

Ronan Wilmot - Director
Ronan Wilmot has acted with the Royal Shakespeare Company, the Royal Court, the Young Vic, The Liverpool Playhouse 7;84 Co. in the UK; in Ireland with the Abbey, the Peacock, the Gate, the Project, the Focus and Dublin Stage One in Ireland. He set up Portrait Theatre Co. to co-direct with Cicely Berry OBE “Murder in the Cathedral” by TS Eliot in Christ Church Cathedral in 1991 during European City of Culture which ran for nine weeks.
He formed The Dublin Theatre Co. to present “Mr Joyce is Leaving Paris,” “Waiting for Godot” and “Exiles” by James Joyce in Berlin in 1996, 1997 and 1998. He directed “The Ginger Man,” by JP Dunleavy in The New Theatre and it toured to New York and Canada in 2000.
As artistic director of The New Theatre, Dublin he has directed “The Cherry Orchard” and “The Entertainer”. He wrote and directed “The Man Who gave The Beatles Away” and directed “Fool for Love “in November 2003.  As an actor, films include; “The Field”, “In The Name of the Father”, “The Snapper”, “The Van”, TV includes “The Insurance Man” and “Shergar”, BBC TV and “Wanderly Wagon”, “On Home Ground” and “Bachelor’s Walk,” RTE.

Posted by La Catedral Studios & The Back Loft at 12:07 PM 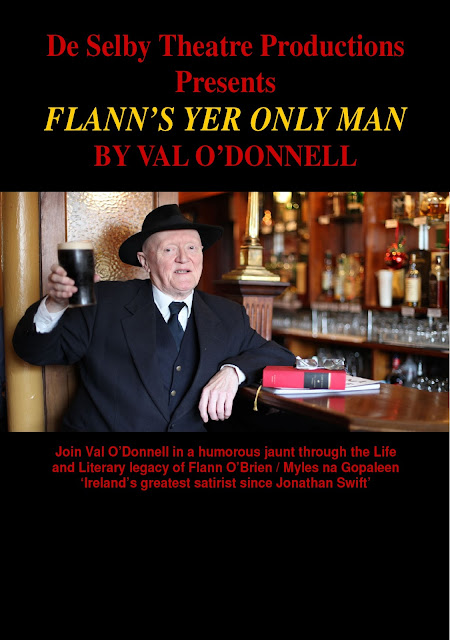 Last opportunity to see this unique comedy performance in Dublin before its featured performance at the Listowel Writers' Week 2013.
Flann’s Yer Only Man  is an entertainment based on the life and work of Flann O’Brien, aka Myles na Gopaleen, aka Brian O’Nolan (1911-1966) -  Ireland’s finest satirist since Jonathan Swift.
Val O’Donnell performs a wide range of extracts from the humorist’s novels and from his celebrated Cruiskeen Lawn column in the Irish Times - linked with key events in the writer’s life.